Books and Fine Art in the New Media
2 Comments

THE BOOK, both print and even current versions of the electronic reader, are already near artifacts. Book publishing is in the death throes of the last century, bound up in static, linear publications. At the same time, the technology of the new media has developed to such a degree of creativity and innovation that Alice Rawsthorn commented in the New York Times of November 28, 2010 that,

These devices offer thrilling possibilities for us to do much more than read words on a screen, and it is deeply disappointing that so few designers and publishers are embracing them.

At the same time, the Fine Art community, artists, museums, and developers have risen to the challenges and opportunities of new media. Tablets, smart phones, and the myriad of new apps enable artists and art lovers to experience art in the most comprehensive and dynamic ways. Just as the iPod changed the shape of the music industry, the Fine Art, and indeed the entire book publishing industry, is on the brink of a paradigm change. Can The Book adapt and survive?

1. The first advantage of Fine Art in the new media is that it should be accessible, from the Google Art Project, and the new and dynamic Museum websites for the Louvre, the Metropolitan, the Musée d’Orsay, the Museum of Fine Arts, the Van Gogh Museum, and others so that, “There is [virtually] nothing between me and my Leonardo.”

2. Fine Art in the new media should be interactive, the zoom views of Google Art being a present prime example:

3. Fine Art in the new media should be viewer directed. “I want to see what I want to see.”

4. Fine Art in the new media should be able to be manipulated, which enables the viewer to use their creativity. to examine, adapt, and experiment with the art. In this sense, you can even make one of your pictures look like a Warhol .

5. Fine Art in the new media should be comparative , enabling the viewer to array pictures from different museums side by side to study technique, execution, and genre.

6. Lastly, Fine Art in the new media should be able to be viewed as a continuum. of man’s effort at visual expression.

A brief history of the book

The title “Whither the Book,” is intended to suggest a look into the future where it is very likely that “The Book” will wither, unless it adapts to the new media. This is not the first time this threat has happened. Eons ago, first “there was the picture,” (art), as a means of telling a story.

Most probably, the first pictures were drawn in the sand with a stick. You can imagine the howls and dire predictions from the stick and sand industry when, some 30,0000 years ago, humans first painted on the walls of the cave. The cave painting industry appears to have lasted for a long time when a paradigm change came in the form of clay tablets and scrolls which were portable, cheap, and reusable.
.

Following the scroll there was the illuminated manuscript, with both words and pictures, and bound together in the form of a book. The papyrus scroll industry withered.

Then, along came Gutenberg and movable type which dealt a withering blow to the illuminated manuscript industry. 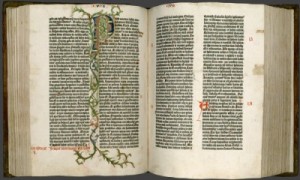 Not much has changed in the ensuing 600 years.

Now, along comes the e-reader, and more importantly, the tablets such as the iPad – another paradigm change for getting the message, or picture, out. All of history demonstrates the truth of the statement by Marshall McLuhan in his 1964 book, Understanding Media: The Extensions of Man that, “The medium is the message.”

Thus far, however, the e-readers have simply been a static version of the printed book, much akin to the invention of the paperback. Thus, the term “static,” in reference to The Book, is meant to indicate that what has been done thus far is simply the continuation of the reproduction of the printed page by other means.

The challenge to the industry remains as tablets and smart phones have now entered the competition. According to the article “On First Day, Apple Sells 300,000 iPads,” from the New York Times, “Apple iPad users have now downloaded more than one million apps from the company’s App Store and more than 250,000 electronic books from the iBookstore.” Approximately 25 million iPads have been sold to date, with 25 billion downloads from the App Store.

“The photograph, which was instantly seen around the world when photos of
the device appeared on the front page of the New York Times’ site and
elsewhere.”
Artinfo, January 28, 2012.

What is to be done?

An integral part of this blog is the New Media Matrix that lists and comments on some of this technology. Here, we will comment on how it can be used to save “The Book.” The innovations listed and discussed will be applied to the fine arts, as it may be said to be the most historical, visual and universal means of communication.

The goal of this blog, Whither the Book, is to break new ground regarding how fine art is presented in the digital age. This includes research and reports on the efforts by publishers, artists, museums and websites, tools, applications, and digital devices to adapt and present Fine Art in the New Media, and suggest new ways in which this may be done. The blog includes the New Media Matrix which will catalogue and comment on these developments. It is hoped that the Matrix will become a major resource and reference tool.

Partial funding for research for the Matrix for this blog was provided by Boston University Undergraduate Research Opportunity Program. Special thanks is due to Tracey Stabile, Editor and Research Director, Kana Maeji, Editor, and Carol Liao, Researcher.